You are here: Home / Get Inspired / Consistency and Courage – Looking Forward to 2014

The New Year is well under way, and if I had a New Year resolution it would be broken by now!

I have been reflecting a lot on 2013, what went well (and not so well). What I achieved and trying not to beat myself up on the stuff I didn’t achieve.

Rather than have resolutions, I thought I’d go for the popular focus words for the year. One of the issues I have is I am not consistent – in anything. I have the attention span of a goldfish.

Then I read a blog post at the end of December – if I could remember where I would link to it! That post was about choosing your word(s) for 2014. This time, there was a list of words and the idea was that you scan the list and let the word leap at you.

The word that launched itself at me was COURAGE

They do go hand in hand, particularly in my business. I’m very good at sitting behind my screen and working in the background. The problem with that is I have all this knowledge and insight that simply isn’t getting out because I am really uncomfortable with putting myself out there.

Perhaps worse, I LOVE helping people understand the web and how it can be an effective tool for their business – it really gives me a buzz. Me sitting here gathering this info, not acting on it, not sharing it, not packaging it up does not help anyone – last of all it doesn’t help me either!

2014 will be my year of CONSISTENCY and COURAGE

Not A Good Start To The Year

At the back end of last year, I moved my website to a new host. It wasn’t without glitches. In fact, even after I thought I won and posted my Murphy’s Law post, it turned out that things still were not right.

Facebook wouldn’t recognise the site. None of the links to Facebook worked. Posting via 3rd party sites just simply did not turn up. Manual posting often gave errors and when not an error they had no information pulled through.

The site was being bombarded with spam because I was running on bare minimum needed to keep the blog running and try to fathom what the block was. No one seemed to know, even the Facebook debugger didn’t work. And we all know Facebook has non-existent support!

Consistency went out of the window as I spent DAYS researching, searching, asking – a great start to the year!

Then I stopped, kicked my own backside and asked myself, “If you were a client Jan, what would you say to you?”

I’d say, “Jan, stop faffing about and focus.  What is important right now?”  (Yes, I am that blunt)

The simple fact is, Facebook provides me with quite a lot of traffic. When you take a closer look, it’s not as targeted as search or Pinterest. Without putting tracking on individual links into groups, it’s impossible to tell what is coming from where on Facebook to individual blog posts or pages.

It was time to draw a line under the whole escapade and focus on what really matters. It was time to do what I had promised myself this year – be consistent and be courageous. I made the decision to manually post, hope it worked when I did and take the hit when it didn’t.

Facebook isn’t the be all and end all in traffic – my traffic sources are quite diverse. It isn’t worth the time spent trying to figure out what was going wrong.

Additionally, when I moved MLBO I also put it on a test site – that works wonderfully with no glitches. I decided to sleep on things a few days while I worked out if it was worth the time and effort to point the posts and pages here on MLBO individually to the corresponding posts and pages on the test site and re-brand.

Oddly, within a day or so of that decision to just stop faffing, Facebook decided to work again for no apparent reason…

Yes, it annoys me I don’t know WHY – but in the grand scheme of things, WHY doesn’t matter.

What Next For My Local Business Online?

Well as you can see, the blog is operational but basic. I did a lot of thinking at the end of last year and I do want to change my focus a bit.

1. I did a short seminar for local businesses and it gave me such a buzz I want to do more talks and workshops. It is something I always planned for MLBO but didn’t have the courage to do it.
2. I will be moving away from the fingers to keyboard “doing stuff” and shifting more to the coaching, mentoring and training.

It doesn’t mean I will not be accepting any “doing stuff” work – I still enjoy that side of things. It is non-scalable though and relies on my time sat at the keyboard. After being hit with virus after virus then that tooth thing last year, it hit hard not being able to sit and tap away at the keyboard.

I will be updating my services page soon to put more emphasis on the coaching/mentoring side of things. I’ll also be adding a products page with links to training courses and downloads – both free and paid (courage Jan, courage!)

There’s still quite a bit of tinkering to do on the back end of the site – mainly stuff I put off during the Facebook débâcle. I’m not quite sure yet about what I’ll go with on the over all “look” of the site – suggestions appreciated. Personally I quite like the good old plain black and white, but it’s not me reading it! 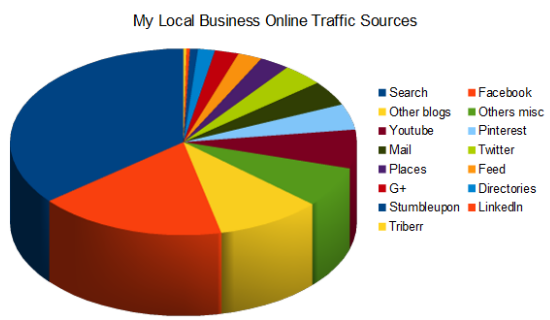 Not all traffic is equal.

Like I mentioned above, Facebook sends in quite a chunk of traffic – but it is impossible to see where on Facebook it’s coming from and therefore which updates convert. By by convert I mean sign up to my email list or send an enquiry.

Facebook will remain part of my over all online marketing strategy – it’s the whole top of mind thing.

The search chunk (all search is in that chunk, not just Google) is still a little big for my liking. It is important, it tends to convert pretty well on long tail searches.

With the whole Google keyword not provided thing – tracking that is getting more and more difficult. I’m not going to worry about that but will practice CONSISTENCY and keep blogging.

What did surprise me was Pinterest. It looks such a little chunk in that pie chart. It is quite deceptive though. Most of that traffic came in the last 6 months of 2013 and since the introduction of rich pins I’m seeing an increase in clicks and corresponding email sign ups.

Youtube steadily drives traffic with my how to videos. I do need to look more closely at ranking videos and where I am pushing that traffic to maximise conversion. (As a quick update to the original post, I found out I have won a Video Branding Online Programme from Creative Flow – how timely is that?)

G+ I’m not as active as I should be. I have made a start, I even updated my profile pic – much to my horror. Since doing that I am finding more people add me to circles and the traffic coming in is creeping up! (Let that be a lesson to myself – practice what I preach!)

All of the above is about VISIBILITY and putting myself out there more. Share my knowledge so people get to know me, trust me and realise I do occasionally know what the hell I am talking about. (Yes, practice what I preach.)

As for products and services

A long post… But I feel it is important for me to draw a line, say goodbye to 2013 officially and look forward to 2014.  I can’t wait to work with my wonderful clients who continue to amaze and inspire me.  Not forgetting the wonderful online friends who support and inspire me too 🙂

What are your words for 2014? Are you putting them into practice?

A web page without an image is almost naked, missing something, a finishing touch. Basic image optimisation can transform your web pages, product … END_OF_DOCUMENT_TOKEN_TO_BE_REPLACED

Not all of us have photographic talent. Creating your own photo images for your website, social updates, blog or presentations is HARD.  When the … END_OF_DOCUMENT_TOKEN_TO_BE_REPLACED

Creating your own local business website is never an easy task, especially when the guidelines change regularly. As always online, the only thing you … END_OF_DOCUMENT_TOKEN_TO_BE_REPLACED